Gadget geek? Gear head? Kari has called me worse. This just another gadget, but one I can justify as being (almost) totally necessary.

This is an AC battery adapter for my Canon 80D (a.d.d.) camera. It provides continuous power during a shooting session. The camera is mounted for vertical photography in my stop motion studio. When my battery dies in the middle of a stop motion shooting session, changing the battery without moving the camera was impossible. BTW, the OEM adapter from Canon was terribly expensive. This one was under $30.

For each shoot, there are 15 frames per second. Nine hundred shots per minute. In the final view there can be several scenes going on at the same time. That’s a lot of shots, but now I won’t worry about the battery dying in the middle of a session.

I had a couple of other projects that interrupted my work on the stop motion video for “Bring the Rain.” I’m back on it now. Stick around, I’ll keep you updated. 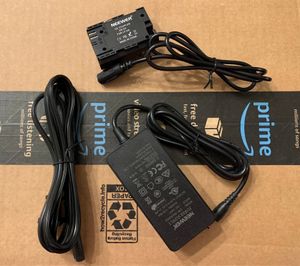