I’ve been asked, “Are You letting your beard grow?” I usually reply with, “My team is in the playoffs.”  Stanley Cup Playoff Beard. Did you read that? I wasn’t kidding.

The Tampa Bay Lightning, defending Stanley Cup Champions, leads the best-of-seven series. The Carolina Hurricanes are trailing 3-1 in the second round of the Stanley Cup Playoffs. Game 5 is in Raleigh Tuesday. They are expected to make a full recovery.

I’m also pulling for the Colorado Avalanche. They had the best record of the COVID-19 shortened 56-game season. It’s possible that the Hurricanes could face the Avalanche in the Stanley Cup Finals. I’d like to see that. 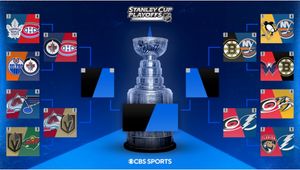 Carolina would have to get seven wins; Colorado would need six wins finishing this series, with both winning their respective Conferences. Colorado is leading their series 2-1. Stay tuned. I’ll keep you updated.