Here’s a subject that I know absolutely nothing about. Just like most subjects, I’ll ramble a bit, move on to a haiku, and we’ll all end up knowing less than we did when we started.

The picture is of my extensive didgeridoo collection of two. Didgeridi?  “Hey Siri, what is the plural of didgeridoo?” Didgeridoos, eh.

One is very different from the other. The small wooden one was a Christmas gift from Kari’s youngest. A travel didgeridoo. Kari must have made him mad over something. The other one is a more traditionally shaped and sounding instrument. I think it was made from PVC pipe.

This circular breathing technique is necessary to play the didgeridoo: breathe in through the nose, exhale through the mouth while making a continuous tone through the instrument. Doesn’t that sound so simple?

One exercise I've tried is spewing water through pursed lips while breathing in and out through my nose. I should have a lifeguard on duty next time I try that. Drowning while attempting this is possible, I’ve figured out.

I was outside on the porch practicing this technique. When I came inside, Kari noticed that my shirt and pants were wet. She said, “I’m glad you are doing that outside.” Ha, what does she know? The neighbors think Kari is married to a complete nutcase. 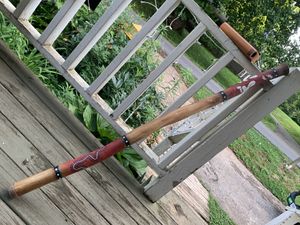 Trying not to drown