Gone to the Dogs

da6d isn’t here today. He’s gone fishing. I knew something like this would happen. He’s not going to even write his final da6d Daily Ramblin’. He didn’t seem to want to do it, so he just left with his gear and left me here and left today's da6d Daily Ramblin' to me. How about a DeO’jie Daily Ramblin’, eh?

He told me to extend his apologies and to express his appreciation to everyone and anyone who read even one of his da6d Daily Ramblin’s over the past year. He seemed to enjoy writing them. I’d sure get lots of ear scratching while he would be thinking, sometimes even cuddles, and lots of late-night walks.

He’s an old sap. He’ll miss you, even though he won’t say so.

There are stacks of sticky notes on this desk. Maybe one has a haiku on it. 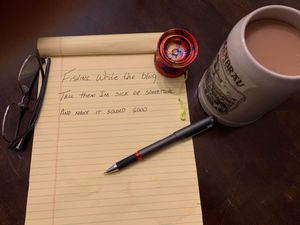 Tell them I’m sick or something.

And make it sound good.