Great people. I'd like to have met them. You see, The Lord Governor General of Canada, Julian Byng, convinced his wife, The Lady Evelyn Bing, to go to a hockey game. Ottawa Senators, a rowdy bunch, and The Lady Byng made it known that she had no use for ungentlemanly conduct in the game of ice hockey.

She was also heard to say in 1925, "If any NHL player that can get through a season without a fight and with the fewest penalty minutes, I'll give them my sterling silver bedroom commode and the candlestick I use to go by."

The Lady Byng Memorial Trophy, formerly known as the Lady Byng Trophy, is presented each year to the National Hockey League "player adjudged to have exhibited the best type of sportsmanship and gentlemanly conduct combined with a high standard of playing ability."

This year’s winner of the Lady Byng Trophy is Carolina Hurricane defenseman Jaccob Slavin. It is only the fourth time the trophy has been awarded to a defenseman. Jaccob had a total of only 2 penalty minutes during the 2020-2021 season for delay of game for accidentally hitting the puck over the glass and out-of-play. “…sportsmanship and gentlemanly conduct combined with a high standard of playing ability." 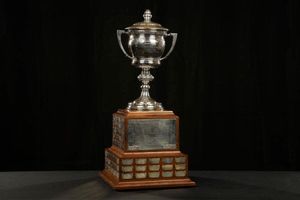