The Habitants scored! Later, there was a slo-mo close-up of Mikhail Sergachev of the Tampa Bay Lightning as the network faded out to a commercial. Anyone that could halfway read lips in slo-mo could see him say "Well, d@rn!"

No, that’s not what he said, but there was no mistaking what he really did say. I heard it with my own two eyes. He opted for the “very unhappy” response to his team’s situation. I’d suspect some video editor might have gotten in his own jab at the Tampa Bay Lightning. Bully for them.

I got to see a good hockey game. My team wasn’t playing. Game 2 of the Stanley Cup Finals Wednesday night.

This is da6d Ramblin’ Number 365. That’s CCCLXV for my Roman friends. I’ve been Ramblin’ on just about everything I could think of since June 30 of last year, and here we are a year later. Thank you, Friends, for reading and following.

Tomorrow, I will publish the last of the da6d Daily Ramblin’s. I hope you’ve enjoyed them. 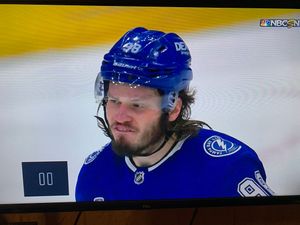 Thought splatters on my keyboard

Haikus for a year